Edit
watch 01:36
We're Getting Mutants in the MCU - The Loop
Do you like this video?
Play Sound

Forever Knight is a television series that ran from 1992 to 1996. It is based on a 1989 CBS television movie, Nick Knight, that starred Rick Springfield as the title character. This was remade as the first two episodes of the series, which was broadcast by CBS as part of its Crimetime After Primetime lineup. Filming was shifted to Toronto, and the show was recast, with Geraint Wyn Davies now playing Nick Knight. Despite a hiatus after the first season and a shift to first-run syndication, Forever Knight eventually ran for three seasons.

Forever Knight chronicles the life of Nick Knight, a thirteenth century vampire living in a modern metropolis. Knight seeks to regain his mortality and rid himself of the savage blood lust that has consumed him for more than 700 years by once again embracing the mortal world.

He takes his first step toward the world of the living when he joins the city's police force. Serving as a homicide detective permanently assigned to the night shift, Knight sets out to clean up the crime ridden city with the help of his partner—initially, Don Schanke; and, after Schanke's death, Tracy Vetter. Despite a change in precincts and a succession of different superiors, Knight proves to have a talent for solving murder mysteries. Nevertheless, each reminds him of his own deadly past, reinforcing his desire for redemption and mortality.

Aiding him in his quest is Dr. Natalie Lambert, a pathologist with the Coroner's Office. The only mortal privy to his dark secret, she uses her medical expertise to search for a way to restore his mortality while her friendship helps him adjust to his new life. A devoted friend and confidante, she describes his condition as a severe allergy to sunlight, and will always step forward with a medical explanation when his strange ailment is questioned by Nick's suspicious police captain.

Tortured by the evil he committed in the past, Knight has distanced himself from the vampire community in order to rediscover mortal thoughts and feelings. Some in the community, however, are not pleased by his flight from the shadows. LaCroix, who gave Nick his immortality, wants him back and will do whatever it takes to conquer his former pupil's morbid qualms about the vampire state. Janette, his former lover, still secretly yearns for his eternal love and embrace.

Still relying on blood to sustain him, Nick faces a constant struggle to suppress his savage hunger to feed. With each passing day, however, he learns to deal with the rage that torments his soul, bringing him one step closer to mortality.

Although the original English-language title of the show is Forever Knight, it has other names in other countries.[1]

In May 1996, there was a discussion on the main Forever Knight mailing list, FORKNI-L@LISTS.PSU.EDU about the particular reasons list members liked the series. This was sparked by a post by Susan Garrett, "Why Do YOU Watch FK?", made 16 May,[1] with responses over the next couple of days.

Susan asked the following questions, though not all fans who responded addressed all points:

Among the longer responses, the following are of particular interest:

There are actually two questions here. Why did I watch it the first time, and why do I keep watching it.

A year or so ago, I didn't like vampires or vampire shows. I didn't particularly like cop shows, either. But I saw this funny, cute guy on Sci-Fi Buzz say that he liked working on this show called "Forever Knight" because he got to say lines like "you cling to your paganism like lichen to a stone." Several minutes of hysterical laughter later, I was flipping through the TV Guide to find out when this show was broadcast.

A few weeks later, after a couple of interesting but not terrific episodes, I saw "The Fix." And was totally and utterly hooked.

I think it is the struggle between good and evil, and the search for redemption, that has kept me watching the show. And of course the acting, which is phenomenal. If Nick weren't a vampire, but instead was a werewolf or an alcoholic or an ex-mercenary or a former wife-beater who was struggling to deal with good and evil and was seeking redemption for past sins, I'd still be watching. (Although I must admit the vampire aspect is very intriguing.) If Nick worked on repaying his sins as a sailor or a private eye or a hobo or a hot-dog vendor rather than as a cop, I'd still be watching.

Most of my favorite episodes have had an important vampire aspect to the storyline, so I guess I would have preferred the balance to be tipped a bit more towards vampires and a bit less towards the cop show.

I like the mix of forward story and flashbacks. And I even like the episodes that had dream sequences instead of flashbacks.

It was the modern feel to it; of vampires in present-day Toronto, ones who are aware of all the old cliches about themselves, all the bad movies, all the tired jokes, who are coping and evolving as they adapt to the world. They aren't walking around in silly tuxedos (much as I enjoy DRACULA:The Series, it is irredeemably silly), they make night baseball and Betty Ford Clinic jokes, and they aren't killing randomly anymore, since they can drink bottled blood. They manage night clubs. They are late-night disc jockeys, and graveyard shift television film editors, and computer hackers. And cops, yes, who can plea "allergies" and get away with it.

If it had been only about vampires and their blood drinking, I would have gotten really bored. If it had been a cop show, well---I might have watched. I loved "Night Heat", another Canadian cop show. But I wouldn't have gotten hooked.

The idea of something as metaphysical and fantastical as vampires coexisting with DNA testing and ballistics is just really appealing.

I don't think I would have gotten as addicted as I did, though, if it hadn't been for the wonderful, Shakespearean feel some of the actors gave the old Good vs. Evil conflict. All those flashbacks---and the wonderful costumes, and the accents, and the idea of the past influencing the present---filled out the scope, set against the really *normal* humans like Schanke and Natalie. And a vampire like Janette! Soooo cool.

I started watching FK waaaaay back when, Crimetime After Primetime, and truly enjoyed the historic flashbacks and the fact that the show's writer's seemed to be not only more intelligent than the average show writer (apologies to any on the list!) but that they gave the viewer credit for intelligence also. Familiarity with arcane events, great moments in history and some really snide asides from the characters added to the show's appeal. Each show seemed to contain references to literature, historical incidents, music, and art that just weren't available in other programs. All this, plus the fact that the actors seemed to enjoy themselves on the show - they weren't just mouthing lines.

I'm not big on cop shows and have never been a vampire fan - I always flashed onto George Hamilton's Dracula whenever anyone mentioned vampires! But FK touched a chord and it wasn't the particular actors involved, it was the ideas presented behind each show. Janette was a fascinating creation and I do wish that she had been showcased much more than she ever was.

While I enjoy the cop shop aspects of FK, cop shows are a dime a dozen on TV. I watch mostly for the vampire. I love the flashbacks and I wouldn't mind seeing an ep that was mostly historical. Unlike some other people, I enjoyed seeing historical characters (Joan of Arc, Conan Doyle, etc) in the flashbacks even though they were not entirely accurate. After all, if I can suspend belief to allow for a vampire cop, believing Rasputin was a vampire isn't all that much more of a leap. :-)

I also watch it because FK is one of the few shows that do not insult my intelligence. It is so different from the endless sitcoms with their canned laughter at 5-second intervals. Mediocrity rules, unfortunately!

I am still awed by the courage of the shows producers. In the pilot episode (Dark Knight) of a brand new show, the teaser was mostly in French! Would Spelling have had the guts to do something like that...NOT! They have never compromised: if a script had a scene in Chinatown, the dialogue was in Cantonese. If it was about a story with an MS sufferer, they cast a woman with MS for the role.

Even their choice of supporting actors is different. A black, female judge, a Native American police captain, a female Japanese-Canadian captain - a noticeable change from TV shows south of the border which seem to have either all-white or all-black casts.

I'm attracted to the vampire element a lot - their powers and immortality - but more than that, I watch Forever Knight for the characters, in particular Nick. His ability to function in the mortal world with occasional humor and certainly with the desire to do good - that after 800 years of a not-so-terrific life (in which he himself has been the cause of so much pain to others and certainly to himself). I feel for him strongly because of the pain and guilt he carries, and want so much to help him let all that go so he can at last come to a certain comfort level in his life. (Okay, so I'm a Dark Knightie!!)

Also, despite ["Last Knight"], the show is about life and living. Life is revered and treasured, and Nick's regard for human life in the past century is honorable. This is an underlying element to his psyche that I like - that Nick loves life and yearns to achieve a goodness in his life. It's even an attribute in LaCroix that I've come to admire - the zest for living. I admit that the idea of immortality is attractive - or at least to be able to live a significantly longer life span. I've been in awe that a show about vampires could be so strongly about life and goodness. I *love* Forever Knight for that!

Most fans did not answer any one question at such length.

Vampire vs. Cop: Reasons to Watch[]

Fans' reasons for watching Forever Knight often involved a discussion of their relative interest in the vampire and cop aspects of the series:

Fans' comments on the flashbacks include the following:

Fans' discussion of relationships between the characters includes the following: 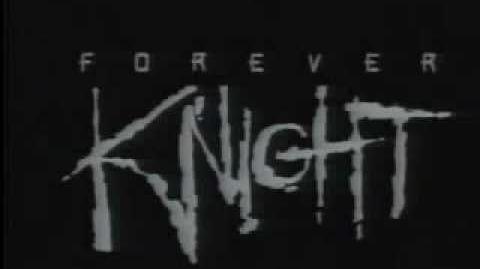