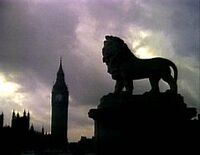 The Blitz was the sustained bombing of Britain in World War II by Nazi Germany between 7 September 1940 and 10 May 1941. The name is a shortening of the German term, Blitzkrieg, or "Lightning War". While the Blitz hit many towns and cities across the country, it began with the bombing of London for 57 consecutive nights . By the end of May 1941, over 43,000 civilians, half of them in London, had been killed by bombing and more than a million houses were destroyed or damaged in London alone. During at least part of this time, Nick Knight was living in London with LaCroix and Janette.

One evening, they are out on the town when a young pickpocket, Daniel, tries to rob them. When he is caught, he reveals that he has been orphaned in the Blitz. Janette takes a fancy to the boy, and decides to adopt him informally. He is decently dressed, and lavished with presents. All seems idyllic, until Nick learns from a conversation with LaCroix that the older vampire is considering bringing Daniel over, just out of curiosity over the way so young a vampire would behave. Horrified, Nick warns the boy to flee; but he dare not explain why, and discovers shortly afterwards that he has been too late to stop LaCroix fulfilling his intentions.

Background to the Blitz[]

After the Battle of France, the Battle of Britain began in July 1940. From July to September, the Luftwaffe bombed airfields used by the Royal Air Force in an attempt to gain air superiority as a prelude to invasion. Simultaneous attacks on the aircraft industry were carried out to prevent the British replacing their losses, but the efficiency of fighter production was markedly increased, so the German plan proved ineffective.

During a raid on 24 August, some German aircraft strayed over London and dropped bombs in the east and northeast parts of the city. This prompted the British to mount a retaliatory raid on Berlin the next night. Hitler issued a directive "for disruptive attacks on the population and air defences of major British cities, including London, by day and night". The Luftwaffe began day and night attacks on British cities, concentrating on London. Perversely, this actually had the effect of relieving the pressure on the RAF's airfields.

The first intentional air raids on London were mainly aimed at the Port of London, causing severe damage. With inadequate searchlights, limited ground-based radar, and few fighter aircraft able to operate at night, the city's defences were limited. Even when beefed up to produce a visually impressive barrage that boosted civilian morale, the defensive artillery had little physical effect on the raiders, except that it encouraged bomber crews to drop before they were over their target—in other words increasing the civilian casualty rate.

London was not the only city to suffer Luftwaffe bombing during the Blitz. From November 1940 to February 1941, the Luftwaffe attacked many other industrial and port cities, which suffered heavy air raids and high numbers of casualties. The most famous of these raids was on Coventry in the evening of 14 November 1940. The attack was intended to destroy Coventry's factories and industrial infrastructure. It killed over five hundred people and destroyed Coventry Cathedral.

Adolf Hitler's aim was to destroy British morale, in which he markedly failed. The Blitz did little to facilitate potential German invasion. By May 1941, the imminent threat of an invasion of Britain had passed and Hitler's attention was focused on the east, with the upcoming invasion of the Soviet Union.

While the Germans never again managed to bomb Britain on such a large scale, they carried out smaller attacks throughout the war, taking the civilian death toll from bombing to over fifty thousand. In 1944, the development of pilotless V-1 flying bombs and V-2 rockets briefly enabled Germany to again attack London with weapons launched from the European continent. However, the Allied advances on the continent after D-Day eventually stopped the bombing.

Adapted from the Wikipedia article on the Blitz.