Edit
watch 01:36
We're Getting Mutants in the MCU - The Loop
Do you like this video?
Play Sound

Downright skinny, dressed in grubby rags, Screed is an unprepossessing sight even before one learns that his chosen food is rat's blood. Yet he and Javier Vachon have remained friends for a couple of centuries at least. During part of this time, he was an integral member of an informal gang of vampires led by Vachon; and they remain friends even though the crew have now broken up.

Little is known of Screed's life before coming across. However, based on both his Cockney accent and a few clues from the episode "Fever", it would appear that he was an English sailor. This is evidenced by the following:

Since Screed's first chronological appearance was a flashback set around 1792 (in the episode "My Boyfriend is a Vampire"), he was obviously turned sometime before that. As mentioned below in the "Manner of Speech" section, the particular speech patterns used by Screed did not come into use until around 1500-1600, indicating that he was born and grew to his physical age—which appears to be 30-something—within that time frame or after. Although not explicitly stated, many fans assume that Vachon was the one to bring Screed across.

Why the first blood he drank upon waking was that of a rat was never described in canon. But, as a consequence, Screed is as fixated on drinking rat's blood as most vampires are on human blood. Such animal-focused vampires are called "carouches"; and Screed is the only example of the breed to make more than a brief appearance in Forever Knight. Although he can drink human blood (and does so in "My Boyfriend is a Vampire"), Screed prefers to prey on rats. He therefore hunts the sewers for food, and keeps a supply of captive rats on hand in his lair, pegged up on a clothesline for handy feeding.

Screed's lair in Toronto is an abandoned cellar. This can be discerned from the chute in one corner, once used to roll things down for storage below. Screed comes in from the alley by sliding down the chute. Living in a cellar affords him quick access to the sewers where he hunts.

Screed is often difficult to understand because of the extraordinary way he speaks. This is an idiosyncratic combination of Nadsat and Cockney rhyming slang. Screed is presumably English, and some 450 years old—which is also reflected in his speech. 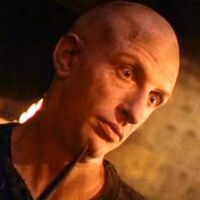 Screed is fond of money, and eager to either avoid or keep on the good side of those who are more powerful than he is. The Enforcers and the Inca both terrify him. But he is willing to take the risky job of hunting bombs planted in the service tunnels...if Nick pays him for each one he brings in. And he provides Nick with information about a carouche living north of Toronto...when Nick hands over a hundred dollar bill. According to Vachon, whenever Screed accumulates a sufficient amount, he heads off to Las Vegas to gamble.

Screed first came to the attention of Nick Knight in "Black Buddha, Part Two", when his new partner, Det. Tracy Vetter, went missing and, suspecting Vachon, Nick tracked him down to Screed's lair. Although he has since used Screed as an informant, Nick always approaches him with distaste—perhaps in part for his choice of surroundings, but primarily because he is a carouche.

Vachon's friendship with Screed also disturbs Tracy, who sees the carouche's lifestyle and home as ridden with dirt and disease.

In "Fever", Screed was out hunting when he spotted a white rat which had escaped from a nearby lab. Its appearance appealed to him, and he dropped his intended dinner to pursue it. However, the white rat had been deliberately infected with an experimental disease that was being developed as a potential cure for AIDS. This disease proved intensely virulent to vampires. Screed was infected.

The symptoms of the disease include a desperate hunger, similar to that experienced by vampires when they first come across. Despite draining many rats, Screed was starving when Vachon visited him. Vachon therefore offered him a drink from his own wrist, which passed the disease on to him. Picking up the dead rat as evidence passed the disease to Nick, who in turn passed it to LaCroix. Although a cure was eventually discovered by Dr. Lambert, it was too late for Screed. He died in Vachon's arms.

As he had been asked, Vachon buried Screed down by the waterfront.

The following is a list of the episodes in which Screed appears (or is mentioned), with a brief synopsis. For a full discussion of his role in each episode, see Screed's scenes.

Screed's appearance and clothes are distinctive. The boots and skullcap were actually supplied by Greg Kramer, the actor who played the part. He had worn the cap to protect his hair while playing Mustardseed in A Midsummer Night's Dream at the Vancouver Playhouse: in that production, the role called for fire-breathing to symbolize the heat of mustard.

At the time the part of Screed was cast, Kramer had been shaving his head for about a year—initially for a role in Incubus Theatre's touring production of The Old Testament, and then to play the Marquis de Sade in Jim Millan's production of A Hole in My Heart, and Renfield in Dracula.[1]

Screed's dialogue was written to the letter and Greg was required to stick to the script exactly. Problem was, he often had no idea what Screed meant and no one seemed to be able to help out. "What you see on screen is an actor desperately trying to make sense out of gobbledigook."

The following are works of fan fiction in which Screed appears prominently among the characters.